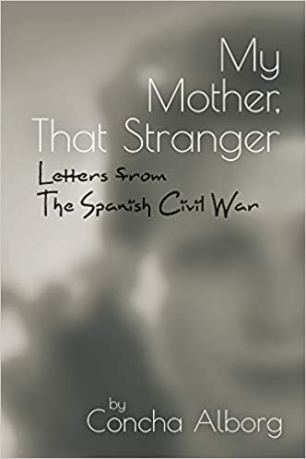 This episode is an interview with Concha Alborg who is the author of “My Mother, That Stranger, Letters from the Spanish Civil War.”

This interview was done with our partners at HumorOutcasts.com. 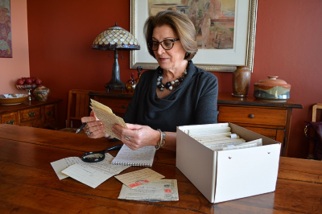 This book is a memoir about Concha’s mother based on the letters her mother wrote to her fiancé who was fighting against Franco’s forces during the Spanish Civil War (1936-1939).

During this fascinating interview Concha talks about the scope of the Spanish Civil War, the plight of immigrants, and how she rediscovered her mother by researching and writing this book. We also discuss how certain historical elements and past political ideologies have relevance in today’s world.

You can find out more about Concha Alborg at ConchaAlborg.com. 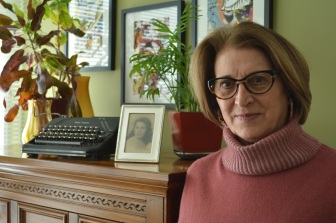 For your convenience the interview is available below at the bottom of this post. Just hit play. The podcast episode is also available on most of the major podcasting platforms including Apple Podcasts, iHeartRadio, Spotify, and many others under the “Billy Dees Podcast.”

HumorOutcasts Interview with Concha Alborg Author of “My Mother, That Stranger, Letters from the Spanish Civil War”

Are you on Twitter? Do you use it to help market your blog, books, photography, or other creative endeavors? Have you been on Twitter with an active account for at least five years?

We are launching a new series of podcast interviews with Twitter users to talk about why they joined, how they have utilized the social media platform, and how the user experience has changed for them over the years.

I originally met Dorothy working on an interview for HumorOutcasts.com. 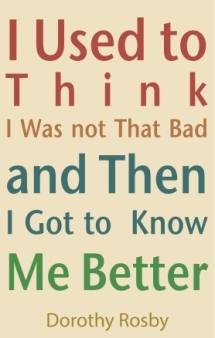 Dorothy Rosby is a speaker and syndicated humor columnist whose writing appears in publications across eleven states. Her column has been recognized by the South Dakota Newspaper Association. She was a finalist in the 2015 Robert Benchley Annual Award for Humor Writing and was the 2015 first-place winner in the Humor Column category of the National Federation of Press Women contest.

Dorothy is the author of “I Used to Think I Was Not that Bad and Then I Got to Know Me Better,” who refers to the book as the book for people who read self-improvement books and never get any better. She also is the author of “I Didn’t Know You Could Make Birthday Cake from Scratch, Parenting Blunders from Cradle to Empty Nest.”

For your convenience the podcast interview is available below at the bottom of this post. The Billy Dees Podcast is also available on nearly all of the major podcast networks including Apple Podcasts, Spotify, iHeartRadio, TuneIn, and Stitcher. You can follow Billy Dees on Twitter @BillyDees.

Fun time on this episode with Arlene Schindler for HumorOutcasts. Arlene is an author and speaker sharing humorous tales of women’s secrets and desires. The book we are discussing during this interview is, “Stand Up and Heartbreak: A Comic and a Sex Addict Walk into a Marriage…”

Arlene originated the comedy column for The New York Post, writing reviews and profiles of comedians appearing in New York City. It was the first of its kind in the country, helping spur comedy’s greatest growth period. Her writing has appeared in The Los Angeles Times, Daily Variety, Purple Clover, The Huffington Post and many other publications. Her novel, “The Last Place She’d Look” is a raucous romp through the hidden sex lives of today’s mature women. 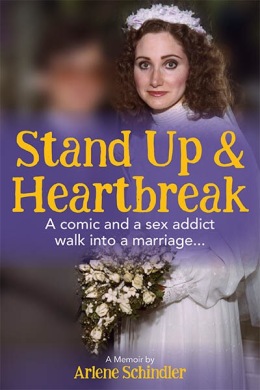 During this podcast Arlene talks about some traits to avoid while dating online and how sexual addiction impacts a marriage. You can find Arlene on Twitter @SmunnySchindler and at her website ArleneSchindler.com

For your convenience the interview is available below at the bottom of this post. Just hit play. The podcast episode is also available on most of the major podcasting platforms including Apple Podcasts, iHeartRadio, Spotify, and on your favorite Alexa device under the “Billy Dees Podcast.”

This podcast episode for HumorOutcasts is an interview with Barbara Hammond who is the author of, “daddy DU JOUR – A revolving door of step-fathers, bad parenting, and happily ever afters.”

Barbara has a diversified background. She has experience regarding retail management, modeling, and owning a talent agency. She has also authored books before including “While You Were Sleeping”which dealt with cancer and the children’s book “Duffy Chronicles.”

As the subtitle of the book indicates, the subject matter of “daddy DU JOUR” is also varied. It chronicles the impact of various home dynamics in relation to the childhood and life of Barbara. Her story is a journey of overcoming life’s obstacles and ultimately reaching a sense of peace having traveled so far. Also comes the greater good of learning from life’s hardships and being better equipped to manage those circumstances for better life decisions while finding one’s own path in life.

For your convenience the interview is available below at the bottom of this post. Just hit play. The podcast episode is also available on most of the major podcasting platforms including Apple Podcasts, iHeartRadio, Spotify, and on your favorite Alexadevice under the “Billy Dees Podcast.”

This podcast is an interview with Jim Saunders who is the author of, “Animal Dances.” (Available on Amazon.)

“Animal Dances” is a World War I historical fiction novel which combines extensive research of WWI along with eyewitness accounts documented in letters to form a backdrop for the fictionalized story of, “Harry.” The story follows Harry as he is caught up in the events of conflict while he longs for his former more carefree time back at home dancing to the ragtime beat of the Animal Dances. His journey through his wartime involvement will present a set of experiences that will impact him for a lifetime.

The story of the writing of this book is an interesting one by itself. While settling the estate of his Aunt Emily, Jim stumbled across a series of letters that documented several years of correspondence between Emily and her brother who was a soldier fighting abroad during WWI. Jim’s initial idea was to take the events described in the letters and to somehow synchronize them into the historical events of WWI.

However, finding an interesting angle to this process proved itself to be cumbersome. After having a lunch conversation with a friend, Jim began to develop the concept of a novel by adding a fictionalized story.

Jim has a plethora of experience and training in various fields of science including that of a researcher. He also has a great appreciation for history and the human experience. This combination alone makes him the perfect author for this type of story. However, Jim had such a dedication to the project that he felt he needed to further develop his storytelling skills in addition to his already well-practiced scientific writing. As a result, Jim enrolled himself into fiction writing classes, workshops, and other various courses.

The product of Jim’s 8 years’ worth of hard work and dedication is an excellent and well-reviewed book. I would certainly hope that you will accept our invitation to listen to our podcast to hear more about this fantastic and creative journey from Jim himself. For your convenience the interview is available below at the bottom of this post. Just hit play. The podcast episode is also available on most of the major podcasting platforms including Apple Podcasts, iHeartRadio, Spotify, and on your favorite Alexa device under the “Billy Dees Podcast.” 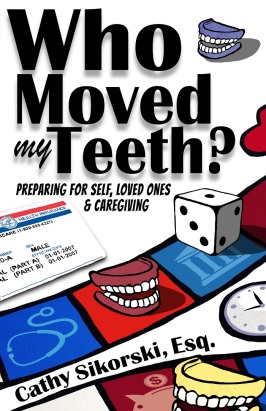 What is a caregiver? If you help someone else you may be a caregiver and not realize it. As time goes on in a given situation your role as such may well become a major responsibility. Many of us should also be aware of the looming risk that we ourselves will someday be in a situation where we require assistance in our daily lives.

These are daunting possibilities to ponder. I happen to feel, however, that choosing to be a caregiver for a loved one when it is possible is a noble and rewarding act. Moreover, it does not have to be the nightmare that it often turns out to be when we wait for a crisis to develop before we take action to become informed.

This is the subject of the book, “Who Moved My Teeth? Preparing for Self, Loved Ones and Caregiving” by Cathy Sikorski.

Cathy is an attorney who specializes in elder care. I found Cathy to be a skilled speaker who infuses the right amount of humor and lightheartedness into such topics as powers of attorney, advanced directives, managing medical bills and many other subjects. The book provides an excellent background into these matters and provides a feel for what you may need to research.

As stated in the book:

This is a highly informative podcast with a strong functional value and is available below at the bottom of this post.

For your convenience the interview is also available on most of the major podcasting platforms including iTunes Apple Podcasts and Stitcher under “Billy Dees.” It can also be accessed on TuneIn through your Amazon Alexa streaming device.

I had a lot of fun interviewing Molly Stevens, who is the author of, “Boomer on the Ledge.”

Molly brought up some good points during the course of our podcast. One of the themes that seems central to her message is that it is never too late to discover new passions and ways to be creative as we mature. In fact, sometimes life experiences can enhance our ability to tackle original endeavors and challenges.

Another concept that seems very dear to Molly is the idea that humor is a great way to deal with life challenges and can also be a way to inspire others to examine their own place in life in a more lighthearted and positive fashion.

Molly lives in Maine and still works as a registered nurse part-time after a long and fulfilling full-time career in the medical field. More recently Molly discovered the joys of writing and over the past number of years has been showcasing her work on her blog ShallowReflections.com.

“Boomer on the Ledge” is an interesting blend of musings and observations about the positive and negative aspects of being a Baby Boomer as well as an inspired pictorial of images photographed by Molly to illustrate the perceptions conveyed in the book.

Please take a moment to enjoy our podcast interview with Molly Stevens.

The Place to Take a Humor Break HumorOutcasts.com